Craig Hudson is an award-winning founder sculptor from Suffolk whose works have been featured on the BBC. Hudson predominately works in bronze and is considered somewhat of a rare breed of artist, a founder-sculptor. He has an intimate relationship with the work he makes often relating to ideas from life experience. Utilizing the themes taken from comics, film, pop art, as well as drawing from personal experience, Hudson conveys both the amusement and the malaise of society in his
compositions. His sculptures are a statement of a culture that is obsessed with fame and wealth and of the fallout of great expectations. He is also a bronze caster who follows the creative process from
start to finish. "We've all been raised on television to believe that one day we'd all be millionaires, movie gods, and rock stars. But we won't. And we're slowly learning that fact. And we're very, very pissed off".
The echo of Auguste Rodin's example is felt in Hudson's figures, and his traditional foundry skills were honed working as an assistant to Laurance Edwards. Also notable are Hudson's broader interests, developed as a student, in contemporary figurative work. The social politics and graffiti
sources of Jean-Michel Basquiat's work is a key inspiration, alongside the rebellion and confrontation presented in work by artists such as Gavin Turk, Franko B and Chris Buden. Thomas Houseago was an important example, making grand figures that conflate a great variety of
influences, from 20th century Modern Masters and World Art to contemporary cinema. More recently, the work of Canadian sculptor David Altmejd is an important touchstone for the unrestrained use of a wide range of materials and objects, found and made, combining the familiar with the bizarre. Hudson's work, like the artist, is quiet and yet cool, immersed in popular culture references that are instantly engaging. Hudson was a skater, loved and still loves Star Wars, the emblems of his passions adorn his studio and creep into his work. Raised and living in Ipswich, he is an urban artist making work that seems incredibly street-wise in a studio that is, by stark contrast, a pastoral dream in the remote Butley Mills, on an estuary in Suffolk. 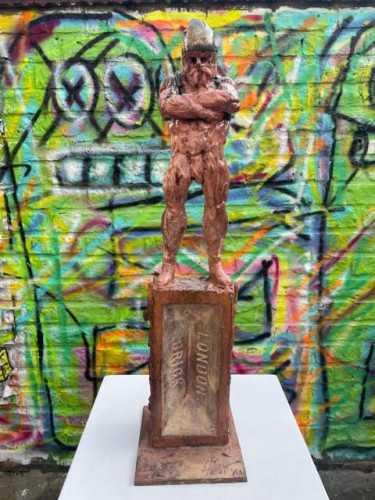